I slid the burgundy folder out from beneath the others and reread the neat white letters printed across the top. I was his assistant. What was my name doing on one of these?

A distant creak made me jump and glance up at the door. No light shone through the half-circle window at the top. Just the walls settling, then.

He’d said to meet him down in his lab, but the long hallway connecting it to the house had been dark and empty, and I’d had to turn on the lab’s lights when I arrived. The emptiness had me a little jumpy, apparently. I’d never been in here alone before.

I swallowed and opened the folder with trembling fingers.

Centered beneath the heading was a photograph of me smiling, straight – red? – hair coming just past my shoulders, and freckles standing out against my pale cheeks. My free hand came up to catch a strand of dark brown hair between my fingers. When had my hair ever been red?

I skipped down past the photo and started reading.

First round of injections partially successful. Subject capable of nearly complete phasing, but only under duress. Sunlight proves problematic, causing–

I reached for the corner of the page when the doorknob rattled and turned. A thin ribbon of light crept into the room, growing wider as the door opened. I shut the folder with shaking hands and tried to slide it back beneath the others before he stepped into the room, but only succeeded in knocking the top one to the floor. The severe lines of his short haircut seemed to give off a threatening aura now, where before I’d only seen discipline.

His gaze went straight to the folder still in my hands. I dropped it on top and scurried away from the long table, trying to keep my breathing even.

“I told you not to touch those.” His voice was sharp. Controlled. Angry. He rounded the table with long strides, glancing briefly down at my folder, then back at me.

I edged along the wall, too aware of the corner coming up behind me. “I’m sorry, I–”

My foot caught on an uneven floorboard. I held my breath, muscles tensed to try to catch myself. Grey and white and brown enveloped my vision, and then I was sprawled on the grass staring at white stucco walls, almost blinding in the sunlight.

I stood, wincing at the stinging in my palms, and touched the wall. Solid.

‘Capable of nearly complete phasing’? Did I just… go through the wall?

I froze when a door banged open somewhere out of sight. Bad. That was bad because – because… why? I’d been looking at a folder, with my name and picture inside, and those words beneath, and then… what?

Run now. Figure out what and why later.

I spun, looking for anything promising.

“Minna!” No owner in sight, but the voice was not pleased. Being found would be bad. Why? – again, figure that out later.

My gaze landed on trees – what looked like the edge of a forest – and I took off.

I crossed into the partial shade and kept running. Dry leaves crunched beneath my feet until I got deeper into the trees. I stumbled over an exposed root and caught myself against the tree, its rough bark reigniting the stinging in my hands.

Hazy images flashed across my mind. A burgundy folder with that name on the front. A tall, dark-haired man, his face set in angry lines. A picture of a smiling girl with red hair and freckles.

I reached for my hair and pulled it forward. Dark. A light breeze picked up, and caught a strand of hair as I let it fall. The ends tickled my cheek.

Leaves crunched a short distance away. My heart thudded and my breath caught in my throat.

I’m afraid. Why am I afraid?

A twig snapped, nearer to me now. I turned and ran, letting the question hang unanswered in my mind.

Partial sunlight gave way to complete shade. The angry voice continued shouting that name somewhere behind me, but even if its owner was after me, the soft ground muffled my footsteps and the rustling leaves covered the quiet patters that remained. Soon the voice faded into nothingness.

I slowed to a walk. My throat burned and my heart pounded, but fear pushed me forward even though I wanted to sink to my knees and rest. Behind me was danger. Ahead was – unknown.

The trees thinned, letting in the fading orange sunlight. I stepped through them, shading my eyes from the sun where it was just visible over distant hills. Not far from me, a dilapidated, whitewashed building cast a long shadow across the grass.

I glanced back into the trees. I’d been… going… somewhere… or away from somewhere… I hesitated. There was something back there, something important, but for now… My legs ached. The breeze carried a chill, and it was picking up speed in the fading light. I crossed the open field to the abandoned building as the sun disappeared, and stepped into the – thankfully warm – darkness.

Why – I’d promised myself to figure out why.

I shook my head sleepily and curled up in a warm, dry corner.

Why would still be there in the morning. Right now, safety was enough. 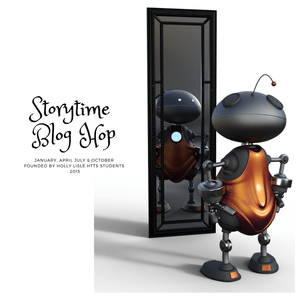 Hello again! This time around for the blog hop, our ideas kept turning out too long to be flash fiction stories. We did end up with a completed story prior to this one, but neither of us liked the fully-written piece as much as its core idea, so we discarded that one too (at least for now).

This one feels iffy as a flash story since it leaves so much open at the end… But perhaps Minna’s escape, even though she’s lost most of her memories, is enough? :)